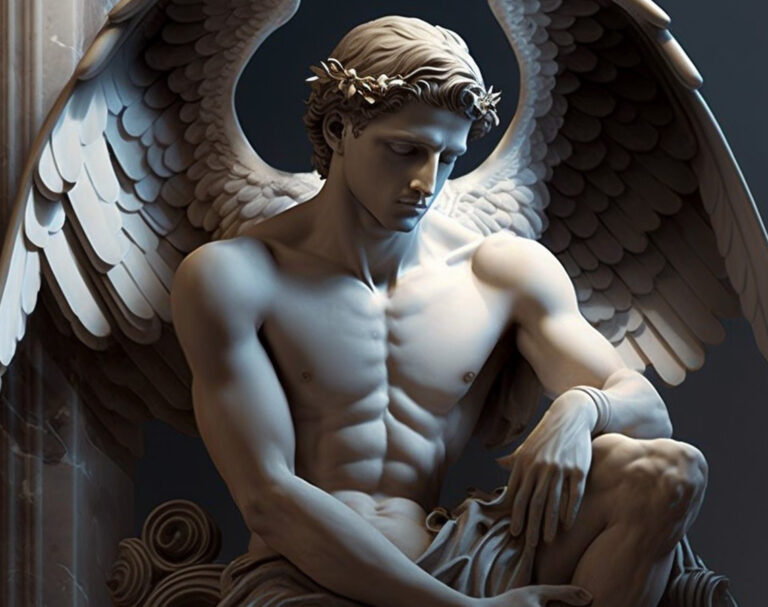 Eros, the ancient Greek god of love, was not accustomed to feeling emotions as deeply as humans did. He had always been detached, watching from above as the mortals below fell in and out of love at his command. But one day, everything changed.

Eros was wandering the earth, observing the lives of mortals, when he came across a young woman named Aria. She was unlike any mortal he had ever seen before. Her beauty was captivating, her spirit was fierce, and her heart was full of love. Eros found himself drawn to her in a way he had never experienced before.

Aria was engaged to a young prince named Alexander, who was set to take the throne in a neighboring kingdom. Eros knew that their love would not be accepted by either of their families and so, he did everything in his power to deter her marriage to Alexander. He used his powers to make Aria question her feelings for Alexander and to make Alexander question his feelings for Aria.

Despite his efforts, Aria and Alexander’s love for each other only grew stronger. Eros found himself feeling a range of emotions he had never experienced before: jealousy, anger, and heartache. He knew he couldn’t let Aria marry Alexander, but he also couldn’t bear to see her with anyone else.

Eros decided to reveal himself to Aria, and he told her of his love for her. But Aria couldn’t abandon her love for Alexander, and Eros knew that. He watched from afar as Aria and Alexander married, and he felt his heart shatter into a million pieces.

But Eros was not one to dwell on his emotions for long. He knew that he had to move on, and so he returned to the heavens, watching over the mortals below with a newfound understanding of love and heartache.

Eros knew that he would never forget Aria, the mortal who had taught him what it was to truly love and to truly feel. He would always remember the time they spent together and the lessons she taught him about love and loss. And as he looked down upon the earth, he knew that one day, he would find love again.

The story captures the theme of unrequited love, sacrifice and the power of love to change even the immortal. It also touches on the difficulties of societal expectations and acceptance. The style of Nicholas Spark is known for its emotional depth and romantic themes, this story fits well in that style